1. Elasmosaurus
In the 19th-century the palaeontologist Edward Drinker Cope reconstructed the skeleton of an Elasmosaurus platyurus, and he erroneously placed the head on the tail. After roughly two decades a colleague discovered the error. The tail turned out to be shorter than the neck, and obviously for Cope this was an unexpected proportional relationship between the two body parts. Cope (inadvertently?) manipulated the drawing of the skeleton (above) by not including the hind (actually front) paddles.

The moral of Cope’s mistake is that the power of the human eye is purely relative to the anatomy of the things perceived. In Art and Illusion (London, 1960) Gombrich notes on this phenomenon: ‘The stimulus patterns on the retina are not alone in determining our picture of the visual world. Its messages are modiﬁed by what we know about the “real” shape of objects’. David Kindersley deﬁned in Optical letter spacing (London, 1976) the matter simpler as: ‘It is a commonplace that we see only what we know […]’. 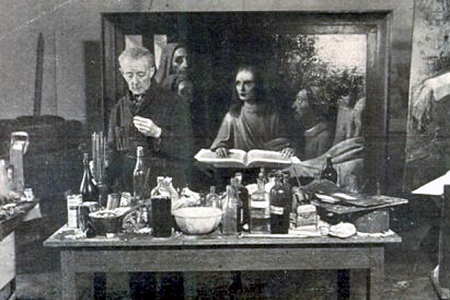 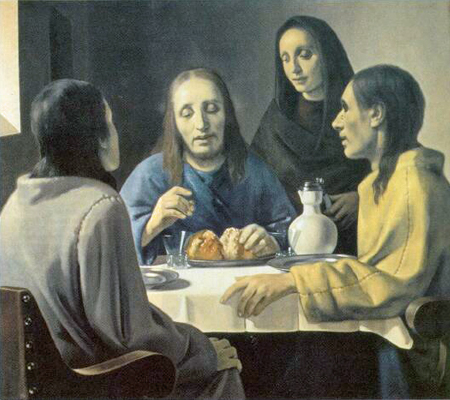 The Van Meegeren Aspect is also applicable on revivals of typefaces. The historic interpretations that, for example, the Monotype Corporation made of types by Francesco Griffo (released under the names Bembo and Poliphilus), Claude Garamont, and John Baskerville (released as Garamond and Baskerville) are typical for the way type from respectively the Italian and French Renaissance, and the Classicism was perceived in the ﬁrst decades of the twentieth century.

The image above shows an enlargement of Griffo’s type for De Aetna (top) from around 1495, and the digital version of Monotype’s Bembo (originally from 1929) at the bottom. The revival differs considerably from the original. In general the letters diverge in the details, but this seems inevitable because in the original printed type the recurrently used letters also differ from each other, if only because of the squashes (the halo effect around the edges of the letters as result of letterpress).
But there are major deviations: for example, the weight in the arc of the n has been reduced and the contrast ﬂow has changed, which results in a different, less ‘Romanesque’, counter. The most obvious and hard to explain deviation however, is the bending of the second stem of the n. The original movable-type n has two basically straight stems and only the h has a curved second stem, like was common in Latin book-hand minuscules. However, the curvature in the stem of the n of Monotype’s Bembo is nowadays considered to be typical for the typeface, and some people might even think that this is typical for Italian Renaissance roman type too.