Parametrization of type design processes is a relatively new phenomenon, and the idea is not generally welcomed in a profession that is preferably more associated with art than with craft. In the world of music ‘algorithmic composing’ seems to be applied and accepted on a larger scale. Hence I draw some parallels between the parametrized composing of type and of music here.

For a relatively long time artiﬁcial intelligence is used for composing music. An example is the Experiments in Musical Intelligence (emi) project of David Cope, who is professor emeritus at the University of California. The emi Project started in 1981 and can be described as a method to come to new compositions via reusing parts of existing pieces of music, i.e., ars combinatoria. This method requires that the emi program is able to analyze and decipher existing compositions.

Tables of measure-numbers for the musical dice game

emi refers partly to the Musikalisches Würfelspiel, a dice game in which the die-eyes determine the sequence of prefabricated bars. Irrespective the sequence, the bars always ﬁt and produce a ‘new’ piece of music. The musical dice game was a popular pastime in the eighteenth century and was played by, amongst others, Joseph Haydn and Wolfgang Amadeus Mozart. To Mozart, who died in 1791, a book on the musical dice game appropriately titled Musikalisches Würfelspiel, which was published by Nikolaus Simrock in 1792, has been incorrectly attributed. Also other authors and composer were active in this ﬁeld, like Johann Philip Kirnbirger (1721–1783). David Levy writes in Robots Unlimited (Wellesley, 2006): ‘In the introduction to his book The Ever Ready Composer of Polonaises and Minuets, Kirnberger explained that the readers “will not have to resort to professional composition” but could now compose their own music.’

A project like emi is not welcomed by everyone, because it places mankind’s creative side in a more down to earth perspective. Sometimes negative opinions are adjusted, however. The American scientist Douglas Hofstadter, especially famous for his book Gödel, Escher, Bach: An Eternal Golden Braid (1979), describes in his article Sounds Like Bach his initial demurs concerning computer-generated music: ‘Back when I was young – when I wrote Gödel, Escher, Bach– I asked myself the question “Will a computer program ever write beautiful music?”, and then proceeded to speculate as follows: “There will be no new kinds of beauty turned up for a long time by computer music-composing programs… To think –and I have heard this suggested– that we might soon be able to command a preprogrammed massproduced mail-order twenty-dollar desk-model “music box” to bring forth from its sterile circuitry pieces which Chopin or Bach might have written had they lived longer is a grotesque and shameful misestimation of the depth of the human spirit. […]’. A quarter of a century later Hofstadter played a mazurka generated by the EMI program in the style of Chopin, who he admires: ‘[…] Though I felt there were a few little glitches here and there, I was impressed, for the piece seemed to “express” something. Had I been told it had been written by a human, I would have had no doubts about its expressiveness […]’. 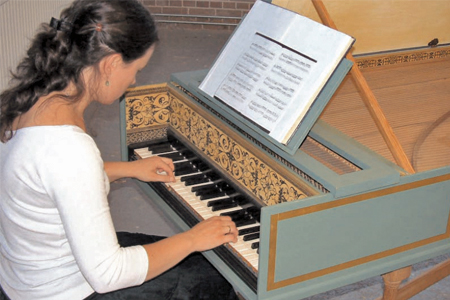 My ﬁrst presentation on the progress of my research at Leiden University on the 11th of June 2008, was illuminated by the harpsichord player Agnieszka Wesolowska, who performed a couple of original Inventions of Bach and a couple of artiﬁcial ones produced by emi.
Prior to her performance I asked Agnieszka via e-mail what she thought of the artiﬁcial Inventions. She wrote me: ‘If I wouldn’t know where they come from, I would probably think they were composed by some good craftsman but not the genius. I could not take them as Bach’s pieces for example.’ After Agnieszka had performed a couple of authentic and artiﬁcial Inventions on the 11th of June 2008, I asked her to play two more, but I deliberately announced the original one as being artiﬁcial and vice versa. When she ﬁnished playing the two Inventions I asked the audience which one they preferred. The majority choose the artiﬁcial Invention, which I had announced as an authentic one by Bach. A matter of perception…

Experiments in what could be labeled ‘typographical intelligence’ will probably be welcomed with comparable initial skepticism as Cope’s emi. The idea that type could be designed in an artiﬁcial way and books could be completely designed by software, is perhaps an undesired relativization of mankind’s creative powers. To cite Hofstadter from Sounds Like Bach again: ‘[…] I was going to face this paradox straight on; I was going to grapple with this strange program that was threatening to upset the apple cart that held many of my oldest and most deeply cherished beliefs about the sacredness of music, about music being the ultimate inner sanctum of the human spirit, the last thing that would tumble in ai’s headlong rush towards thought, insight, and creativity […]’.

Technically it is quite possible to develop software that creates type and handles typography in ‘AI’s headlong rush towards thought, insight, and creativity’, I reckon.