Over the past twenty-ﬁve years as (Senior) Lecturer at the Royal Academy of Arts (kabk) in The Hague, I developed an educational program, especially targeted on the ﬁrst year students of the Graphic Design department. It will not come as surprise here that my program focuses on the harmonics, patterns, and dynamics of the Latin script-representations currently in use, and subsequently on writing, lettering, type design, and typography. The students are guided during their investigation and exploration of the underlying structures with the help of a couple of models and related software tools I developed over time. 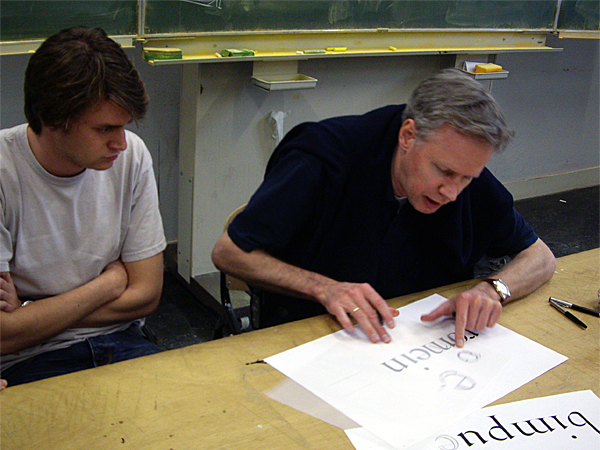 Explaining the basics to a ﬁrst year kabk student

In line with my predecessor and tutor at the kabk, Gerrit Noordzij, I consider writing with a broad nib, ﬂat brush and ﬂexible pointed pen a good starting point for the exploration of the factors that give letters their shape, like construction, contrast-sort, contrast-ﬂow, and contrast. Nevertheless I do not consider writing a prerequisite for designing type or for the proper understanding of the basics of typography. Nor is it in my opinion a necessity to (partly) repeat and reproduce the evolution from writing into typography to understand the development of type in the past ﬁve hundred years.

However, the chirographical practice has proven to be a solid basis for designing type and for gaining insight into the basics of typography. Especially for the developing of a reﬁned and sophisticated ‘hand’, I consider writing an important basis still, like type designers as for instance Jan van Krimpen, Hermann Zapf, and Gerrit Noordzij have proven. As Bruce Rogers commented on Lutetia< in a letter from 1953 to Jan van Krimpen: ‘The Italic in particular seems to me almost without ﬂaw; though emphatically and unequivocally type, it could hardly have been produced by any other than an accomplished calligrapher’.

For the lettermodel I was inspired by pictures of blackboard demonstrations by Edward Johnston, dating back to 1930 and 1931, and also scribbles and sketches Gerrit Noordzij made for me to explain the relation between the pen strokes that construct a letter, during his lessons at the kabk. In the decades that followed I added additional construction methods for capitals and cursives. In the book accompanying the television course Kalligraferen, de kunst van het schoonschrijven (‘Calligraphy, the Art of Writing’), that I wrote at the end of the 1980s, the lettermodel took a prominent place.

Around 1990 I started to use the expression ‘Harmonieleer van het schrift’ (‘Doctrine on the Harmony of Scripts’) and one of the ﬁrst talks I gave on this subject was at a meeting of the Dutch tex society midst 1993. Over the years my program at the kabk was enhanced and reﬁned, and actually it is constantly under construction still. The challenging aspect of lecturing freshmen is that one is forced to constantly deﬁne and reﬁne the most elementary information. As a result, lecturing works in both directions; as much as the information I hand over to the students form the foundation for their research, their ﬁndings and questions form a basis for my research. Or, to quote Seneca: ‘Hominus dum docent discunt’.

In the course of time the lettermodel became more and more versatile. Related systems were deﬁned by me and got a name and a place, like the relational system, the proportional system, and the rhythmic system (see also my notes on systems and models). Subsequently the idea arose to further enhance and reﬁne my ﬁndings and conclusions, and to collect these in a publication, because there is none that describes the most elementary underlying structures of type and typography on a micro-level. Perhaps the fact that both typography and type design are from origin the metiers of craftsmen, is the reason for the lack of such a publication. However, for teaching type design one needs a micro-level description, to educate students, to understand matters like legibility, or even as a basis for the automation of type design processes.