6.2 Notes on the parametrization of type design processes 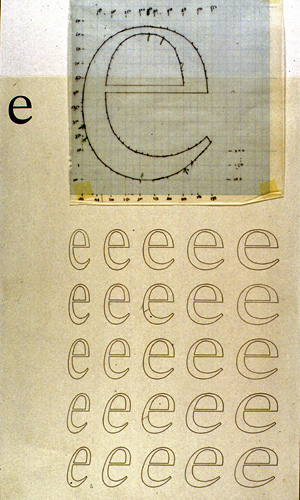 Modiﬁcations on a home computer (around 1984)

I purchased my ﬁrst (home) computer, a BBC Electron, in 1983. There was no software available for editing glyphs for this computer, of course. So, although I am deﬁnitely not a programmer, I wrote some simple digitizing (vector format), modiﬁcation, and interpolation software in Basic. The program was named DrawMonkey, and some of the resulting letters (output from a matrix printer) were shown in the 1987 publication 26 letters. Since that time I have become more and more interested in deﬁning and arranging font production processes. 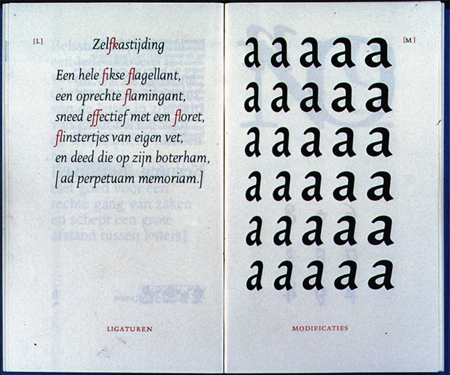 Since the end of the 1990’s I have been involved as initiator and software architect in the development of DTL FontMaster, a set of batch utilities for the professional font production. The following diagram shows the workﬂow I deﬁned and built over time (ten years, to be precise) for the production of fonts at the Dutch Type Library. For this workﬂow, which is based on DTL’s proprietary software, I wrote the command and script ﬁles myself, of course.

FontMaster-based workﬂow for the font production at DTL

After the development of batch-software for the font production the next logical step was to investigate the automation of type design processes. The models I developed over the years already forced me to parametrize parts of the letter-creation process for my students, if only because the digitally trained students more and more tend to see writing with a broad nib and a pointed pen as a remnant of a past era (see also: 4.1 Notes on writing as a basis for type design). It is partly from this experience that I started to investigate the possible standardizations of the ‘font production’ in the Renaissance.

The development of the LetterModeller (LeMo) application, which can be downloaded from this site, was partly the result of this all. It is a primarily a tool for exploring and further developing my theoretical models, but also a tool that can be used for generating (the basic structures for) letters. For my research I have created a monolinear (skeleton) capital font in the IKARUS format, of which the horizontal proportions are related to the width of the m of the primary harmonic model, and which can be modiﬁed using LeMo’s parameters.

Concise overview of the two current variants of the ‘Archetype’ font

LeMo was used for the development of the typeface I am developing for my dissertation, named Archetype. The typeface comprises display and text versions, each containing variants based on proportions and details applied in the Renaissance and the Baroque.

Frank E. Blokland is type designer (of amongst other typefaces, DTL Documenta and DTL Haarlemmer), Senior Lecturer in type design at the Royal Academy of Arts (KABK) in The Hague since 1987, and Lecturer / Research Fellow at the Plantin Institute of Typography, Antwerp, since 1995. Blokland founded the Dutch Type Library in 1990 and a couple of years later he initiated and supervised the development of DTL FontMaster, a set of professional font tools developed together with the German company URW++. Currently he is finishing a PhD study at Leiden University on standardizations and systematizations in roman and italic type since their Renaissance origin.
View all posts by Frank E. Blokland →
This entry was posted in 6. Parametrized type design. Bookmark the permalink.