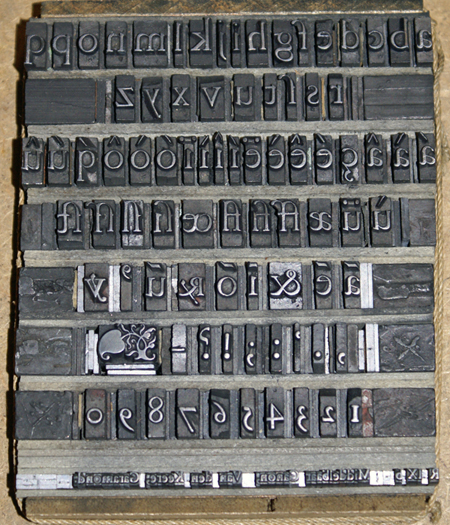 The casting was done by Guy Hutsebaut of the Museum Plantin-Moretus. Because there were no moulds available which support the body sizes of the Gros Canon Romain and Moyen Canon Romain, the letters were cast on a body which did not exactly ﬁt. For testing the (standardization of the) width of the letters, the used 19th century mould was perfectly suitable though.

In the movie Guy Hutsebaut shows the adjustment of the mould’s register using a single set pattern (the o) for a whole group of matrices. The set patern came from original sixteenth century foundry type of the Gros Canon Romain from the inventory of the Museum Plantin Moretus. After the ﬁnal adjustment of the register (using a small hammer) Guy checked the width of the newly cast letter against the original French Renaissance one. After approving the width, Guy cast several other letters from the same group, which –as expected– did not need additional adjustments of their widths. 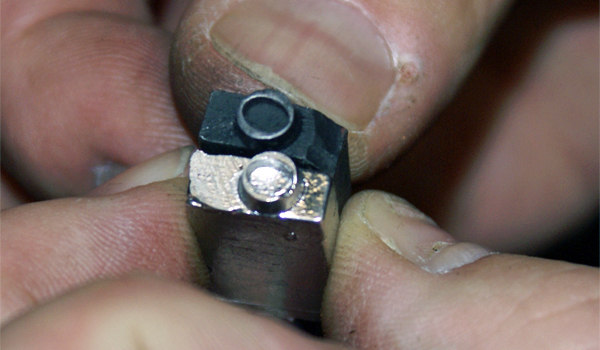 Although apparently less reﬁned than the ones from Garamont, the matrices which Van den Keere made with shortened ascenders and descenders could be applied in the same way, i.e. without any adjustments of the register (see image below). Hence the title of this movie: Standardized Casting. 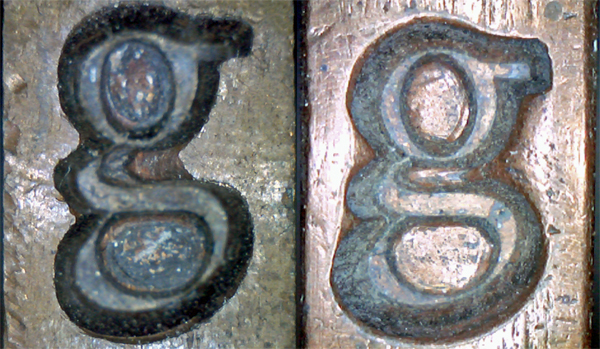 The background music is the Est-ce Mars by Jan Pieterszoon Sweelinck (1562–1621), a recording made in 2004 at the Pieterskerk (St. Peters Church) in Leyden on the famous Van Hagerbeer organ from 1643, as part of the DTL Type & Music Project. The organ player is the internationally laureled Leo van Doeselaar. Sweelinck lived in the same time as Van den Keere (ca. 1540–1580) and Christopher Plantin (1520–1589).

Frank E. Blokland is type designer (of amongst other typefaces, DTL Documenta and DTL Haarlemmer), Senior Lecturer in type design at the Royal Academy of Arts (KABK) in The Hague since 1987, and Lecturer / Research Fellow at the Plantin Institute of Typography, Antwerp, since 1995. Blokland founded the Dutch Type Library in 1990 and a couple of years later he initiated and supervised the development of DTL FontMaster, a set of professional font tools developed together with the German company URW++. Currently he is finishing a PhD study at Leiden University on standardizations and systematizations in roman and italic type since their Renaissance origin.
View all posts by Frank E. Blokland →
This entry was posted in 5. Research, 5.2 Empirical testing. Bookmark the permalink.